Engineered Culture: The Unintentional Side Effect of Agile Transformation (and How to Prevent It) 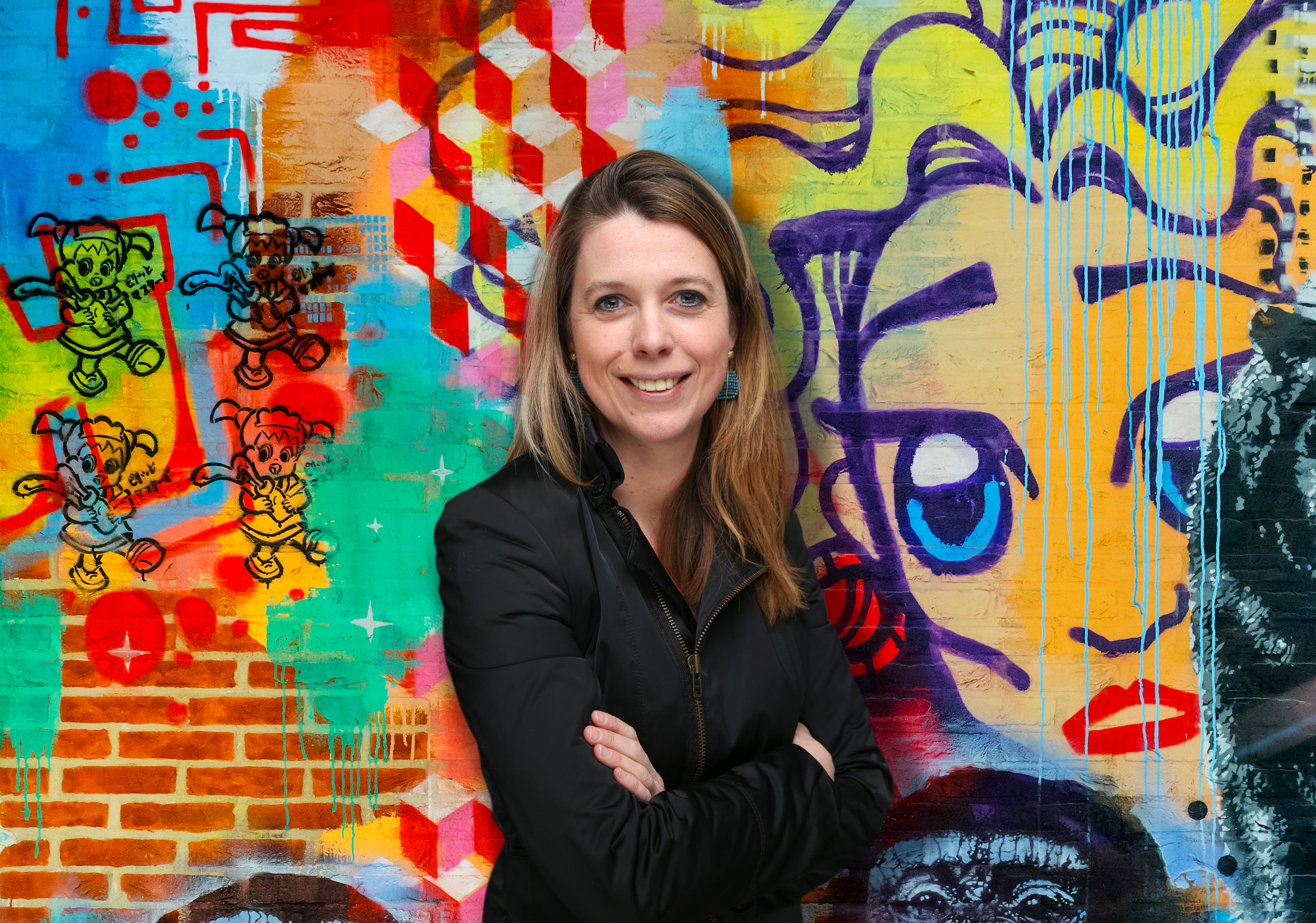 Organizations that transform into Agile ones need their cultures to reflect their new values. Agile cultures promote flexibility and autonomy. They’re purpose-driven, idealistic, tolerant, open, inventive, explorative, warm, engaged and sincere. But how does an organization transition towards such a culture? Is it possible to create or engineer one? And, if so, what potential side effects should you consider?

. Agile NXT is a new magazine full of inspiration for professionals on the emerging Agile journey. It challenges you to think differently and improve yourself, your team, and company a little more each day. Written by Ellen Barree and Mirjam Diependaal. 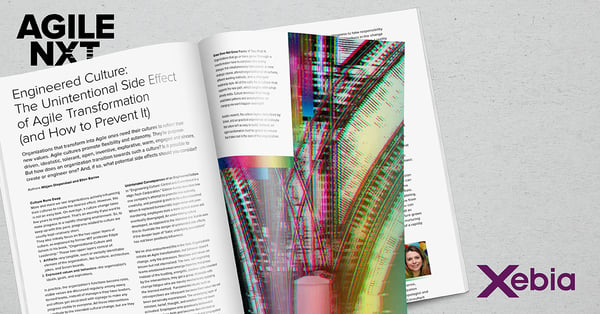 Culture Runs Deep
More and more we see organizations actively influencing their cultures to create the desired effect. However, this is not an easy task. On average, a culture change takes five years to implement. That's an eternity if you want to make progress in a rapidly changing environment. So, to keep up with this pace, programs related to culture are usually kept relatively short. They also initially focus on the two upper layers of culture, as explained by former MIT professor Edgar Schein in his book, ”Organizational Culture and Leadership.” These two upper layers consist of:

1.  Artifacts–any tangible, overt or verbally identifiable element of the organization, like furniture, architecture, jokes, and Scrum boards.

In practice, the organization’s functions become roles, visible values are discussed regularly among newly formed teams, instead of managers they have leaders, and offices get decorated with signage to make any progress visible to everyone. All these interventions contribute to the intended cultural change, but are they sufficient?

Unintended Consequences of an Engineered Culture
In “Engineering Culture: Control and Commitment in a High-Tech Corporation,” Gideon Kunda describes how one company’s attempt to promote non-authority, creativity, and personal growth in its culture backfired. When it replaced bureaucratic supervision with peer-monitoring, employees took a more cynical stance and eventually disengaged. An undermining culture
developed, as opposed to the intended one. Kunda uses this to illustrate the danger of unintended side effects if the deeper layer of “basic underlying assumptions” has not been positively influenced.

We’ve also encountered this in the field. Organizations initiate an Agile transformation, but behavior doesn’t change, only the processes. Structure and values are known but not internalized. The new, self-organizing teams envisioned never emerge from the first phase. Instead of the bustling, energetic, creative units intended by the interventions, they get a group of people with change fatigue who are merely mechanically applying the learned method.  Fundamental rituals such as retrospectives are infrequent because their value has not been personally experienced. The underlying layer of mindset, belief, thought, and emotion has not been activated. Employees who previously believed in the change lose faith and become demotivated or disengage. The carefully constructed and propagated ideology slowly crumbles, and the opposite effect of the intended change occurs instead.

Grass Does Not Grow Faster if You Pull It
Organizations that go or have gone through a transformation have to consider the many changes that simultaneously take place: a new strategic course, altered organizational structure, different working methods, and a changed leadership style. All of this calls for a culture that supports the new path, which begins with what already exists. Culture develops from long-established patterns and assumptions, so changing one won't happen overnight.

Kunda’s research, the culture layers described by Schein, and our practical experience all indicate that culture isn’t as easy to build. Instead, an Agile transformation must be grown to ensure that it takes root in the core of the organization.

5 Seeds for Cultivating a Sustainable Agile Culture
A sustainable Agile transformation doesn't just happen on paper; it's propagated through everyone's actions and exchanges throughout the entire organization. It’s essential to influence culture at the deeper level of “basic underlying assumptions" by planting the proper seeds.

1. Start each Agile transformation with intention. What is the passionate story about what you want the future to bring? Articulate the aspiration; tell appealing stories in plain language. Help people to understand and connect to the need for change. Make sure that the need refers to real problems because culture is somewhat hidden and ambiguous. Give people the opportunity to think, feel, visualize and reflect on how the intention of the transformation relates to their personal objectives. A spirited organization grows from "fertilized soil," which get replenished by each person's work and behavior.

2. Creating a new culture should begin with an analysis of the current one. You need to first understand the outcomes of what the current culture produces and how it does or doesn't align with current and future market and business conditions. Spend time, attention, space and reflection to map out the current culture and to understand the real dynamics of the organization. Conduct in-depth and lively dialogues across all layers of the organization. Listen sincerely, even to what is not said out loud. Realize that the undercurrent is an invisible influence on culture and that it determines the effectiveness of the work and the organization's ability to change.

3. Make a GAP analysis of the current and ideal situation. Build on what’s already there. Be careful not to send the message that the current ways are “wrong.” Instead, emphasize perpetuating and strengthening the positive qualities of the organi­zational culture and “curing” the dysfunctional aspects by changing demands, ambitions, or circumstances. Identify common objectives based on the GAP analysis. Concerning both behavior and output, targeted environments abound with small, vibrant signals that link the present to a future idea. Focus everyone's attention by consistently nurturing and supporting engagement. Effective groups and their leaders place value on setting priorities, identifying decisive behavior, and flooding the environment with signals that connect the two.

4. Select and develop leaders who align with the target culture. Influential change agents in the organization can advocate for a culture shift through their language and actions. Ensure cultural continuity through living by example; in words, heart, and hands. Only then will the desired change be experienced. Recognize that every choice, every call, and every action signals priority, values, and beliefs. Have a commitment and willingness to take responsibility for this and to discuss it with others in the change process. Only when spoken ideals become a reality in daily practice will there be a shift in shared norms, beliefs, and implicit understanding. Then it creates a collective consciousness in which everyone works together, and optimal performance is achieved.

5. Don’t treat culture change as an isolated change, but integrate it with other changes in your transformation. Don’t just talk to each other about the desired culture or behavior. Apply, practice, and experience it in reality. Organize lots of small, brief development meetings. They create more impact than a few large ones because it’s easier to stay focused, absorb information, and integrate what’s been learned into daily work. Organize many small cultural interventions across the organization, but don’t make “culture” the topic, as if it’s something separate from the transformation. Instead, pick a practical problem and solve it in the right way, using the cultural values and behavior you hope to instill. Culture is an integral part of the process, so make its development and effects visible, as well as your appreciation for any progress. Support the creation of a culture and language in which people address each other about behavior that counters positive change. Be alert to the possible unintended side effects of cultural change through observation, and then “pull the weeds.” Take the basic underlying assumptions into account.

You can't create a thriving culture by carving a mission statement into granite. Making sure that everyone can recite some one-liners won’t do it either. There’s no “golden ticket” approach for creating an ideal culture. It’s an ongoing process of trying, failing, contemplating, and learning over and over again. It doesn’t come from “a solution” and can’t be imposed. However, you can ensure you’ve planted all the right seeds so that an Agile culture emerges from the inside out. Culture grows from solving problems together, continuously nurturing development, and tending to the challenges of a rapidly changing world.

Want to know more about Culture, Personal and Organizational Behavior in an Agile environment? Download