With increasing customer demands, system reliability becomes more critical by the second. You can’t prevent all incidents, but you can learn from them—making your systems more resilient, reliable and capable of providing the services your customers need.

“Some things benefit from shocks; they thrive and grow when exposed to volatility, randomness, disorder, and stressors and love adventure, risk, and uncertainty. Yet, in spite of the ubiquity of the phenomenon, there is no word for the exact opposite of fragile. Let us call it antifragile. Antifragility is beyond resilience or robustness. The resilient resists shocks and stays the same; the antifragile gets better.”

—Nassim Taleb, from Antifragile: Things that Gain from Disorder

Anti-fragility is a quality attribute of systems. How can we improve systems to detect incidents earlier, resolve them faster, and make sure they do not reoccur? Site Reliability Engineering (SRE) is the methodology that Google uses to run very large production systems in a reliable way. Can we learn from Google’s practices to increase the antifragility attribute of our operations?

According to Nassim Taleb, there are three kinds of systems:

SRE is a data-centric approach that focuses on creating systems that learn from errors and outages. Typically this data is collected from technical elements, such as CPU usage or memory utilization. However, these metrics don’t give you direct insight into the impact the incident has on your end user. So, it’s important to align business objectives with technical objectives.

To bridge the gap between SLIs and SLAs, you can define Service Level Objectives (SLOs).

By defining SLOs and SLIs, you can discover (potential) failures before your customers do.

When running applications, we eventually have to deal with failure. Creating and operating reliable systems requires understanding every way the system can fail—and making sure you detect and resolve the failures when they do happen.

Whenever a failure or incident occurs, it has real, often monetary, consequences. It can bring down parts of your company or even the company as a whole. To minimize the impact of an incident, the first priority is resolving it. After the incident has been resolved, you need to investigate the underlying cause.  If the root cause is resolved, the incident should not reoccur—so the incident improved the system.

Since system failures are inevitable, the question that remains is how to deal with them. Often failures are experienced as stressful, even frightening—the consequences can be dreadful.

For this reason, people are often afraid to fail, which creates a fragile environment. To become antifragile, you need to embrace failure. When a failure occurs, the question should not be who is to blame. Instead, focus on how the failure could occur and how to prevent it from happening again in the future. Within SRE this is done using a concept called “Blameless postmortems.”

Introducing blameless postmortems will take away the fear of failure, meaning that people will address any issues faster. The faster you are able to see (potential) failures, the faster you can take action to recover. Eventually, this will make your system more reliable and increase customer satisfaction.

By introducing SRE concepts into your daily workflow, you can build processes and systems that lead to antifragility. Understanding your system, proper incident management, and embracing failure all contribute to creating a culture of continuous feedback and continuous improvement. Every time your system fails, you will be able to respond faster, find the root cause analysis, and then define concrete actions to resolve, prevent and learn from it. 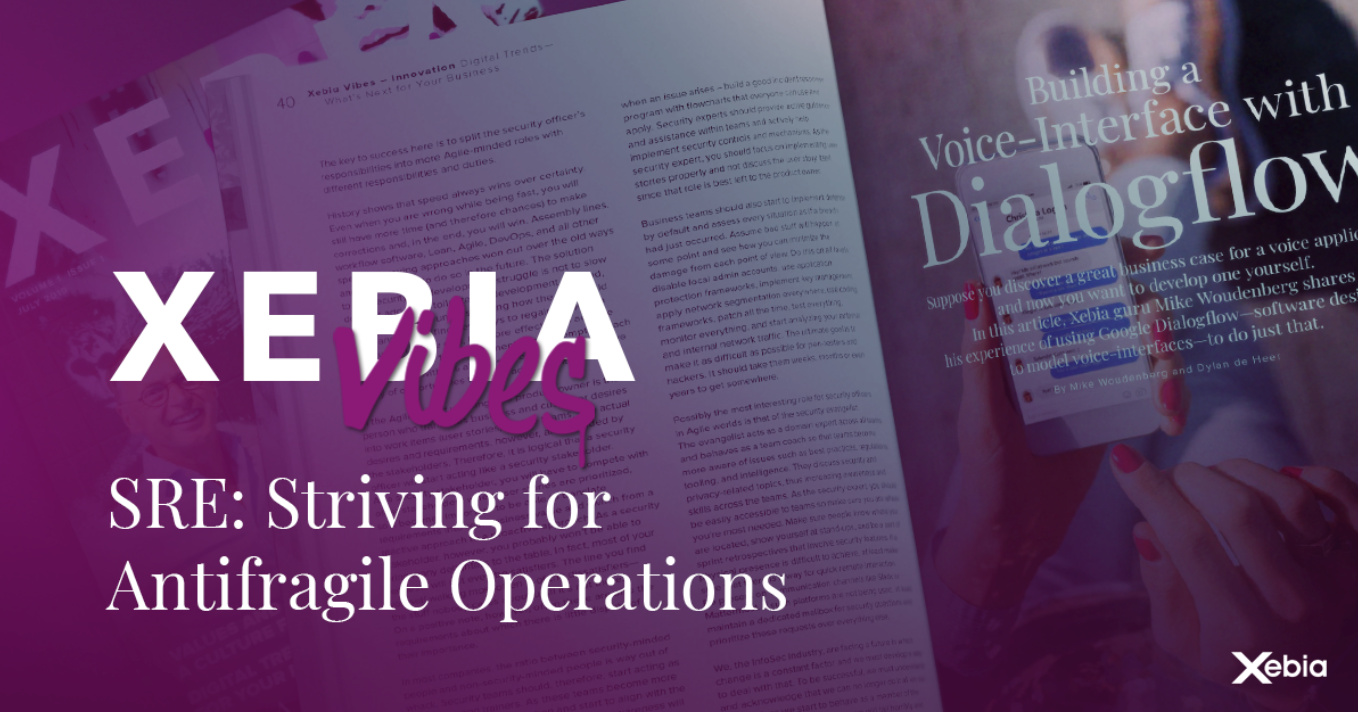 Conquer the world with Azure Machine Learning
Are SLAs in IT Service Management dead?
Temenos T24-Transact practice and its excellence in Xebia